If you have come straight to this page you really should start with part one and part two of my story.

I ended last week by telling you they had found my bowel had twisted.

The anaesthetist that had been with me since we had arrived at Jessops was the one that came to tell me along with another consultant.

This meant I had to go back down to theatre and have it untwisted!

They said as my wound was split so significantly they would go in through that.

Now Hallamshire that’s attached to Jessops (where I had my section) didn’t have a surgeon at that time to do this second op, it looked like I was going to have to be transferred without my hubby or the babies to another hospital elsewhere in the city.

The anaesthetist meanwhile was due to finish her shift but told me she was going to do her upmost to get the surgeon from the other hospital to come over and do it at the Hallamshire. she was on the phone ages just outside my room. I could hear her telling whoever was on the end that she wanted the surgery done at the Hallamshire and that it must be done asap!

She came back to see me after a while and told me not only had she got the surgeon to come to us but she was cancelling her evening plans and was going to take me to theatre!

It was around 10.30 at night when I eventually got taken down and by midnight I was back in recovery but this time no tv Theme tunes! Hubby was there though to make sure I was ok. before I was taken up to the Intensive care ward again.

Here I was told I had to wear a pressurised oxygen mask as my lungs were a little squished. however, its nothing to worry about. they said I could either have a face mask that is quite tight and can cause some people to feel restricted and uncomfy or a helmet type thing made of plastic that you put your head in and the oxygen is pumped in. I chose the helmet Called a C-pap helmet.

It was actually better than the first night I spent on Intensive care as the helmet was really noisy with the sound of the oxygen coming through it. This meant I couldn’t hear the beeps from the monitors and I actually got a better few hours sleep!

After around 4 hours they said I could take off the helmet!

The next morning I must have felt better as I chatted and chatted to the nurse about my thoughts and feelings from the past few weeks. I think I really needed to process things.

I was still nil by mouth but my mouth was so dry and tasted awful so the health workers brought me a wash kit, toothbrush water and toothpaste. I’m not sure if it was because of my mouth being so dry or what but brushing my teeth felt amazing!

Hubby came to see me after a while, he said I looked so much better.

I now had to get up out of bed again and like after the c section. my muscles having been cut for the second time!

Later on, I was transferred back to the high dependency unit.

I was still nil by mouth and I still had the tube in my nose.

I was told once that had nothing else coming up it I could start on some fluids!

It wasn’t long before I was asking for a cup of tea. Next, I was told I could start eating soft food!

A couple of days later Saturday 9th – I was up and out of bed still very sore and tired and full of trapped wind! – Still no bowel movements. But I felt well enough for my big twins to come and visit! They had not yet met their baby brother and sister nor had they seen me for 2 weeks.

It was amazing to see them and see them meet their new siblings. They spent time cuddling them and staring at them! 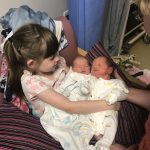 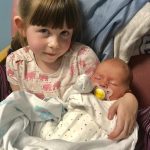 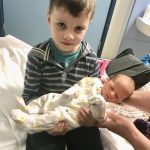 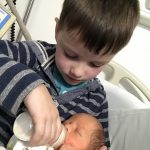 Sunday came I was transferred back up to the postnatal ward! I spent the night on the ward but the next morning was told that as I had a long way to go before I could be discharged I had to be moved again to the ward opposite as the one I was on was for quick turnaround patients.

I was told that they had a room for me – so I got up out of bed had a wash got dressed and walked the length of two wards the furthest id probably walked since I got to Jessops in the first place! along the corridor, I was met by my lovely anaesthetist who said she had come to see how I was doing, however, she could see I was a lot better as I was waking!

I arrived at my new room- Hubby was given a camp bed so that he could continue to stay and support me and help with the twins.

I sat on the bed in my new room looking at the squirrels running about the trees outside when a wave of emotion of the past few weeks hit me!

I sobbed like Id not sobbed for ages! The nurse came in to do my observations and said there would be no point doing them right now as they would be bound to be high. she went and got me a cuppa and said she would come back in a while!

Sunday afternoon I had a surprise visit from some friends of ours – It really cheered me up they even stayed with the twins while me and Hubby went and got a cuppa in the patient kitchen. It was the first time we had been just us since before the csection!

We went out on the balcony – Although it was cold it was nice to just get some air and see the sky! Even just be us for a moment!

Later that night I felt the urge to go to the toilet! – I did it! A bowel movement finally!

I told Hubby who went straight out to tell the nurses! If I’ve learnt one thing during my hospital stay its that the nurses are obsessed with bowel & bladder habits!

The Next day, another bowel movement! –  That’s when I decided enough was enough! I wanted to go home. I wanted to see my big twins. I wanted to get in my own bed, watch my own TV, be within my own 4 walls!

My daily visit from my anaesthetist came, I told her I wanted to go home and she went off and the next thing I know I’m getting visited by lots of different people to do any last minute checks that neede to be done before discharge!

First up was the mental health team, then a physio, then a lady who did the twins hearing tests – She had to do a complex test on them as they had spent some time in SCBU.

Later that day around 5pm I was given a large bag containing all the medication I needed to take at home and I was told we could leave!

Find out how we got on with the first few days at home next week!

Overwhelmed By Chaos – What …

How to Embrace A …