This is quite a long story so I am posting in 2 parts!

Its well over a month since I posted about my Operation.

I just didn’t have the emotional or physical strength until now to post about the past month and a half.

If you follow my social media accounts you will see that I had got through the op.

I just thought I would jump on here today and let you know a little about the events of the past few weeks!

I posted up to the point that we had been admitted to Jessops Hospital to spend a week trying not to go into labour.

After a week of  “resting” hubby staying with me each and every day It was the Tuesday before I had my op!

The lovely nurse who took us to visit SCBU where my babies would be taken not because they thought there would be anything wrong with them but because I would need to recover from the anaesthetic.

She gave me a pack to express some milk if I felt up to it after I had come round from the anaesthetic. She gave me some cloth hearts that I could put in my top and then when the babies were away from me we could exchange scents to aid bonding and milk flow.

The anaesthetist came back to see me to make sure I had no more questions.

The surgeon came to make sure I knew what was happening the next day.

I had the perinatal nurse come and chat through things with me to ease my mind a little.

Some of the other members of the team came and introduced themselves too.

That night myself and hubby went out to the seating area with a cuppa. I prayed silently and we held each other for a while, tears flowing about the enormity of the next day! 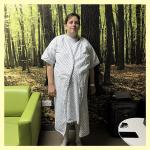 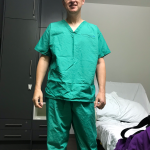 We got into the recovery room and I said goodbye to hubby.

She talked to me all the way through the prep of the operation. until finally, she said I’m now giving you your sleepy meds …………

I don’t remember what time I came around but when I did hubby was there and my mum. I was in the recovery room and Hubby showed me a pic of the babies. I remember there were tv theme tunes playing in the background.

I can’t remember much else until I woke in intensive care and had my babies at my side.

I remember the only thing I had to say was – Blimey baby girl J has long nails would there be any nail clippers to clip her nails? I did try to give them a little breast milk but I really was too tired and full of morphine to feed them any significant amount.

I spent one night on intensive care hooked up to so many monitors that every time I dropped off to sleep the monitors would beep as the heart rate monitor is set at a certain amount and every time I nodded off my heart rate would go down further than that amount. They told me not to worry but when it’s beeping you can’t really forget about it!

From here I was on drip fed antibiotics and fluids and a bag of blood.

It was from here I was able to get out of bed for the first time – after just a normal c section this feels like the worst thing in the world! You feel like you are going to rip open and everything feels like its going to fall out.

I continued to be given IV fluids and painkillers,

I managed to eat some food and drink a little tea!

Everything was going in the right direction………….

You may also enjoy: