Earlier in the week, we took a trip to Maxeys Farm Shop in Kirklington Nottinghamshire to pick a couple of pumpkins to carve.

We arrived around lunchtime and the car park was already nearly full. The car park attendants showed us to an empty space luckily not too far from the entrance.

We changed into our wellies and headed into the field. once in there seemed to be loads of pumpkins left to pick even though it had been open since the beginning of October.

Before we set off to pick our pumpkins we spied the Bouncy Castle Pumpkin and joined the short queue to go on!

After the bouncy castle, the kids saw the tractor ride so we headed to the top of the field to go on.

The tractor took us around a top field where there were more pumpkins growing and a party tent. 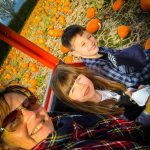 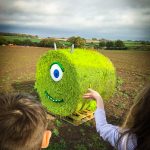 After the two rides, we went back out to the car park to pick up a wheelbarrow to collect our pumpkins.

We all needed the toilet before we went back in, We could only find portaloos and only single ones. no disabled ones so we all had to squeeze into the single ones (I wasn’t going to leave 5-year-olds on their own outside)

Back to the field for pumpkin picking but first the kids wanted an ice cream. I tried a pumpkin one, the kids had a mint one and a clotted cream one. The ice-cream van had come from Thaymar.

I have to say the pumpkin ice cream was really nice. something I would definitely try again!

Right now for what we came for. The kids spent ages scrutinising each pumpkin picking one up saying this is the one mummy, no wait let me look over there, then they would put one back and pick another until they were happy with the one they had!

We then pushed the barrow down the field to pay (Cash Only) There was a bit of a queue to pay for our pumpkins!

After we had put our pumpkins in the car we went back in to check out the spooky woodland walk. 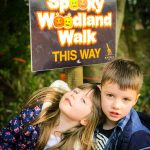 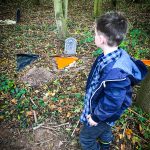 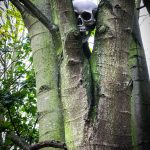 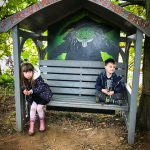 I didn’t get time to look in the shop. but next time maybe!

The kids loved their afternoon out

Maxeys Pumpkin Patch is open until 31st October but the farm shop is open year round.

The pumpkin patch is open from 9am – 5pm each day

For more details go and check out their website

I have not been compensated for this post all opinions are my own.